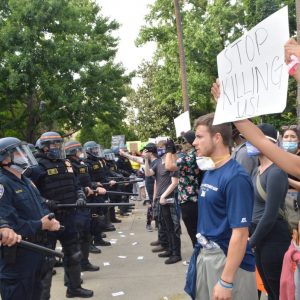 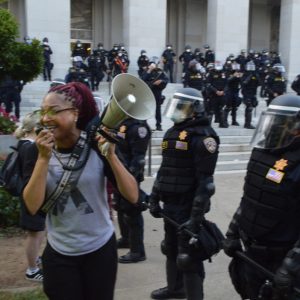 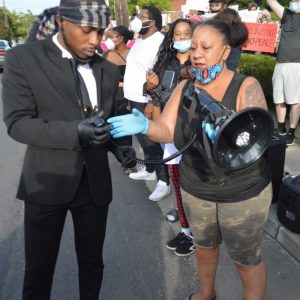 There are many aspects to the protests occurring in cities and towns up and down the state of California. One that stands out is the participation of young, Black people.

Outspoken, courageous, and committed, these young African Americans have become, by default, the anchors in a mass movement sparked by the brutal murder of George Floyd in Minnesota.  Although they are diverse group of Black youth – by political identification, education, where they are from in the state, and more – they are all uniquely equipped to articulate and bear witness to the racial and economic injustices that a multiracial coalition of Californians have now made their cause.

“At the end of the day everybody here is united, and we all want justice for George Floyd. Period,” said Jamier Sale, 28, co-founder of Cell Block By Cell Block, a community-based organization in Sacramento that focuses on criminal justice reform.

Across California, Latinos, Asians, Arab Americans, and Whites — Christian, Jewish, Muslim, et al — have jumped into action with passion. But the presence of Black youth, millennials between the ages of 25 and 39 and the Generation Z crowd born in the mid-1990s to mid-2000s, has become central to holding down the coalition of people raising their voices and fists in unified condemnation of police violence and discrimination.

Sale, who is also a member of the Party for Socialism and Liberation (PSL), a progressive political action organization, attended a demonstration at the State Capitol in Sacramento this past weekend. Thousands of people gathered at the rally to protest Floyd’s murder.  Sale and other members of the youth-led movement met officers of the California Highway Patrol (CHP) at the steps on the east side of the state building adjacent to California State Capitol Park.

“You can name the names (of all the people who experienced police brutality) because everybody comes with their own history, but this is about George Floyd,” Sale told California Black Media (CBM).

On Memorial Day, Floyd, 46, died in police custody after a White Minneapolis Police Department officer pinned him down and pressed his knee into the African American man’s neck for nearly eight minutes. A cellphone video showed Floyd telling the cops, “I can’t breathe.”

The Floyd tragedy shifted the country’s consciousness from the COVID-19 pandemic to the fraught and distrustful relationship, rooted in a well-documented history of violence, that persists between African Americans and law enforcement.

Most of the demonstrations across the country started as peaceful marches, but, for days now, they have escalated into violent rioting and rebellions that have rocked every major city in the United States as well as in California. The riots have resulted in several deaths, mass looting, arson, vandalism, and billions of dollars in property loss.

For instance, in Sacramento the movement began peacefully in the city’s oldest suburban neighborhood Oak Park on the night of May 29. Thousands of protesters, the majority of them young people, gathered to kick off the protests organized by Black Lives Sacramento (BLMS).

The CHP officers expected the crowd to attempt a march down one of the nearby Highway 99 off-ramps. The north-south interstate is a major California intra-state freeway that runs through the San Joaquin valley.

But, according to Tanya Faison, founder of BLMS, that was not a part of the group’s protest plan.

“Just to let you know, CHP is deep on the other side of that bridge. They are not going to let us get on that freeway,” Faison said, speaking into a bullhorn to the large crowd. “But one of the police stations is right around the corner.”

The protestors marched a little more than a mile to the Joseph E. Rooney Police facility of the Sacramento Police Department, a substation in South Sacramento. When they arrived, a few Sacramento Police officers emerged from the facility in riot gear toting rifles that shoot rubber bullets.

The confrontation between the young people and the police was contentious, but it did not get physical. Stevante Clark, the older brother of Stephon Clark, who was killed by two Sacramento police officers in March 2018, described how he felt about the march.

“This all brought me back to my brother and Eric Garner,” said Clark, 27. “We’re hurt and we all feel the same way, though a cop has been charged. As for George Floyd, justice is still being denied. There are still killer cops on the streets.”

Garner, the man who Clark was referring to, died after New York City cops held him in a  chokehold in 2014. The incident happened on Staten Island, one of the city’s five boroughs. He was also African American.

The next day, Clark participated in a demonstration at the State Capitol where he and other activists met CHP officers who had formed a perimeter around the building where California’s laws are made.

Grace Swint, 29, from the San Francisco Bay Area, was one of the young protesters that helped lead the rally that went on for hours. Swint told CBM that she appreciated non-Black people participating in the movement, but she had to ask them what they would do once the rallies subsided.

“Personally, I’m just out here to make sure they are focusing that energy in the right place and that they know what to do when they go home,” Swint said. “This is good but it is not enough. I know for a fact that media and propaganda … they feed off of our emotions. It’s a good outlet to let those emotions and opinions out. But what are you going to do when you leave here? I need to make sure that they understand that.”

Since the demonstrations began in the state capital, there have been some non-fatal casualties. Late night on May 30, two protestors, one female the other male, were hit by rubber bullets when a deputy from the Sacramento County Sheriff’s Department shot them in downtown Sacramento, according to several local news reports.

The female, struck in the face during the peaceful protest, is 18 years old and the male is 19. The Sheriff’s office had a different take on the situation and released a statement telling its version of the events.

‘The initial investigation indicates the subject was throwing objects at the offices and deputies prior to being struck by a less than lethal weapon that was utilized by a few of the officers to stop the assault,” the Sheriff’s office said in a written statement.

The protests continued through Sunday in Sacramento with the youth still leading the way. There were reports of store break-ins and property damage around the city that increased after nightfall.

Sale said that society must begin to understand how people between the ages of 13 and 39 think. It’s a generation that must be reckoned with and they “bounce their energy off of each other’s energy,” Sale said.

“Between each other, they have so many forms of communications that older people don’t know about. (If society) doesn’t absorb the energy of the youth, the youth are going to create their own organizations to replace the current organizations.”