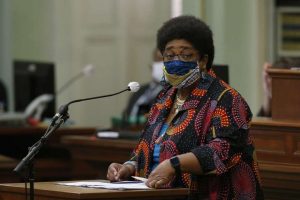 The “reparations” bill calls for the creation of a task force to study and propose ideas for how African Americans in California can be compensated for slavery and its “after lives,” as the author of the legislation, Dr. Shirley Weber (D-San Diego), describes the Jim Crow laws and other forms of injustice and state-sanctioned discrimination that have existed in the United States from 1865 until now.

“The bill would require the task force to recommend, among other things, the appropriate mechanism for redress as it pertains to California’s role in the enslavement of Black people,” Weber read in a statement at the bill’s hearing to her colleagues on the California state Assembly floor.

The California state Senate is now reviewing the bill and is expected to vote on it by June 25.

If the bill passes the Senate and Gov. Newsom signs it into law, the state will appoint and commission an eight-member task force comprised of people from different backgrounds. The team would lead the study that defines what reparations should look like and who would be eligible to receive compensation.

“Until the end of the U.S. Civil War, California city and county law enforcement authorities enforced a contract labor system, allowing slave holders to effectively hold persons in bondage,” Weber said. “In other words, California state, county and city authorities actively supported the institution of Black slavery both within and beyond California.”

In May, the Assembly Judiciary committee voted yes on the bill. Nearly a month later, the Appropriations committee passed it, too, before it moved to the Assembly floor for a full vote last week.

“Its time we took an honest look at our history. This is not about pointing fingers. It’s about getting to the truth. African Americans have loved this country, and we have served it, and we have contributed to its might as much as every other American,” said Hardy Brown, the founder of California Black Media.

“We are not making this up. The history is all there. City councils, state legislatures and the federal government crafted racist laws and adapted racially-biased public policies that deliberately excluded African Americans,” Brown continued. “They erected legal barriers that held us back and robbed us of economic opportunities that were afforded others for centuries — both here in California and across this land.”

“Justice requires that those who have been treated unjustly need the means to make themselves whole again,” Weber told her colleagues.

The Assembly Republicans have not issued a formal statement opposing AB 3121. However, Joshua Hoover, Kiley’s chief of staff, has said that he believes a discussion about reparations for slavery should happen on the federal level.