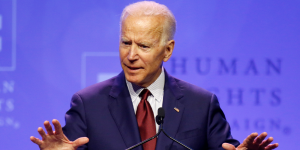 Mirror, mirror, on the wall who is Black folks’ greatest enemy running for president this fall?  If there was a truly free and fair mainstream press, or, at least, an objective investigative Black press, the answer would be a banality—Jim Crow Joe Biden. However, sinister forces have idled the pen and voice of the media when the true political record of Mr. Biden is in question. Instead, the media has wantonly participated in an orgy of hatred and vitriol against President Donald J. Trump, and the Fourth Estate has deliberately ignored the incumbent’s history of being amicable with many Black people and a generous supporter of African American causes prior to 2015 when he decided to run for president. Ironically, Trump became a recent convert to the dog whistle politics that Joe Biden had been a master of for over four decades. Nobody is interested in canonizing Trump, but there is a deceitful and mendacious effort to beautify Joe Biden who is a notorious, grinning, neo-liberal, racist, and the architect of what many call the New Jim Crow.  Any Black person excited about voting for him is as insane as a sculptor seeking to erect a statue of Hitler in Jerusalem.  Just as single-party politics destroyed the newly independent nations of Africa, brain-dead Black loyalty to the Democrats is causing a slow-burn genocide of African Americans.
None of Joe Biden’s shameless cooning and fawning running dogs can debate the historic fact that this evil man built his career by
attacking Black people. Mr. Biden was the enthusiastic and vehement voice against school desegregation almost two decades after the historic Brown Decision of 1954. No one can dispute that Biden cozied himself to and was the willing pupil of hardcore racist Dixiecrats who fought against the Civil Rights Act of 1964, the Voting Rights Act of 1965, the Fair Housing Act of 1968, opposed Affirmative Action, opposed the War on Poverty (i.e. Job Corp, Upward Bound, Free School lunch program, Head Start, CETA, Medicaid, Medicare, and the extension of Social Security to domestic and farm workers) and anti-poverty programs, supported the Omnibus Crime Bill of 1967, and defended Apartheid in South Africa. Pathetic house slave Jim Clyburn who opposed Dixiecrats in his youth in the 1960s betrayed his own legacy shining Biden’s dirty shoes asking Blacks in eight of America’s poorest counties  to salvage the dying presidential campaign of unrepentant career racist with early onset dementia. What does it profit a black politician to gain entry into the white world and lose his soul? Aside from a indulging few friends and family the sellout CBC Democrats doing the Jim Crow Joe Shuffle have made no significant tangible legislative progress for Blacks in 50 years, but these turncoats ardently fight for the rights of sexuality militants, rabid feminists, illegal migrants, hateful foreign businessmen, slumlords, and racist police unions.

Since Joe Biden became the front-runner in March of this year, not one media group has ever bothered to question how has the politician’s career served his Black constituents. In fact, this writer is not aware of even one Black leader in Delaware endorsing Biden.Left-brain, emotionally-crippled, and cable-news lobotomized Black folks have no idea that Biden’s Republican opponents poll very well among Blacks in Delaware. Trifling-mainstream-news-addicted Black folks are not aware of the intense poverty, endemic police brutality, inferior schools, and hopeless conditions that about 30% of African Americans endure in Delaware.  Delaware is so racist that reports of lynchings and large-scale human trafficking of Black people is a common knowledge in the hood in Delaware. Joe “Beau” Biden Jr. the late Attorney General of Delaware is alleged to have allowed racial terrorists terrorize Delaware State University and turn-a-blind-eye to the mysterious hangings of Black men in Dover Delaware’s Silver Lake Park and other parts of the state.  They say “like father like son” except when it is Quisling bought-off black misleaders. Soon, hireling house slaves will try to convince us that Joe Biden marched with Dr. King in the 1960s, but due to is poor memory he forgot.

Lest we forget, Biden was the architect and/or key backer of the
Clintonian era Crime Bill and Welfare reform efforts that destroyed
the lives of millions of Black people. Millions of Black people have been starved, beaten, profiled, jailed, racially profiled, tortured, raped, stripped of assets, driven insane, been subjected to home invasions, falsely imprisoned, stripped of the right to vote, lost custody of children, rendered homeless and destitute by “Biden’s Law”.

If only the masses of Black folks could find it in their hearts to detest Joe Biden, Nancy Pelosi, Hillary Clinton, John Lewis and other Democrats who have done far more to harm Black people than Donald Trump, there might be a chance of a political turnaround in our downward spiral as a race. In eight years as vice president, Biden spent his time covering up for his junkie son Hunter (more like Blunder) Biden and daughter and unlawfully enriching his family. While Biden helped craft the 100 to 1 crack to cocaine sentencing disparity to allow whites to get shorter sentences than blacks, Hunter Biden according to some reports likes rock cocaine too—probably as much as he likes skipping child support payments.  Sadly, too many Black folks think opinions and emotions are equal to facts, but they resent when LGBTQ play this same game with “gay is the new black” In a nutshell, a woke Biden vote is a sellout joke!