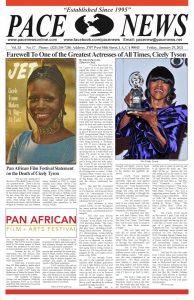 “I come from lowly status. I grew up in an area that was called the slums at the time,” “I still cannot imagine that I have met with presidents, kings, queens. How did I get here? I marvel at it.” Cicely Tyson spoke these words when she was presented with an honorary Oscar statuette at the annual Governors Awards in 2018 reported Mark Kennedy an Associated Press writer announcing the passing of Tyson yesterday at 96.

Although Tyson came from lowly status she has left an indelible mark in the annals of American history when it comes to entertainment and the arts. She used what she had and made it when Black people where stereotyped and shut out from the Broadway and the halls of Hollywood. Few had gone before her but many came after her because she kicked open the door and made it possible.

I am grateful to have had the privilege to be in her presence as part of the press pool during the 2009 Congressional Black Caucus gala when the first Black President of the United States Barack Obama were being honored in Washington, D.C. It was a blessing and I was mesmerized by her grace, style, and class after having grown up seeing her on a small black and white TV screen in her role in “Sounder”, as a sharecropper’s wife and to be there to see her live and in living color was truly amazing. Cicely Tyson was one of the first to express her unapologetically Blackness without fear of reprisal of losing roles or money. A dark-skinned Black woman was on the TV screen and it motivated me to do big things. She was a natural and she always maintained her dignity.

She told The Associated Press in 2013, “I’m very selective as I’ve been my whole career about what I do. Unfortunately, I’m not the kind of person who works only for money. It has to have some real substance for me to do it.”

Real substance is what carried Cicely Tyson throughout her career and her fans loved her for her stance, commitment and her integrity.

Her roles were diverse from a sharecropper’s wife in “Sounder” to the classic role in the 1974 television drama “The Autobiography of Miss Jane Pittman,” that gave many, including myself, being Black and from  Mississippi’s sharecropping, cotton-picking culture and life coming out of slavery and living  through the Jim Crow era as depicted, an invaluable history lesson  about ourselves as descendants of slaves as she is seen aging from a young woman in slavery to a 110-year-old who campaigned for the civil rights movement of the 1960s.

To see through Tyson, the soul of the perpetual pain of injustice after multiple generations we saw it right before our eyes and it was because of Cicely Tyson who defied the stereotype and stood up. She is to be honored with all of our respect, dignity, gratitude and thankfulness that she passed our way and left a legacy that is worth emulating by working together through elevation of the race.

She brought life to strength and dignity even in bondage. It was a role that catapulted her to the stardom she rightfully deserved.

Cicely Tyson inspired many of us to break the color line especially when she went against the norm and drank water from a “whites only”  water fountain while the white polices were staring. A change had come and Miss Jane Pittman was making it through the incredible, talented, and indefatigable  Ms. Cicely Tyson.

Yes, she created a movement in our young hearts with her soul-stirring role she turned into a historical masterpiece, “The Autobiography of Miss Jane Pittman”

“It’s important that they see and hear history from Miss Jane’s point of view,” Tyson told The New York Times. “And I think they will be more ready to accept it from her than from someone younger”

She was right and not only did we accept Miss Jane’s point of view, but we also accepted the voice and the character by which Miss Janes was brought to  us through the phenomenal and incomparable, Cicely Tyson.

Yes, it was Tyson who demonstrated the importance of making movies with a purpose besides making money.  One report says she once complained to an interviewer: “We Black actresses have played so many prostitutes and drug addicts and house maids, always negative. I won’t play that kind of characterless role any more, even if I have to go back to starving.”

She took a stand and set standards in Hollywood and on Broadway when it came to the roles that she would play and today, we are benefitting from her tenacity and her grits to speak up and out and to go against the status quo. They didn’t let her go  because she was still acting and on the scene to strut her stuff in many other movies, on TV and Broadway shows. She continued with such films as “The Blue Bird,” “Concorde — Airport ’79,” “Fried Green Tomatoes,” “The Grass Harp” and Tyler Perry’s “Diary of a Mad Black Woman.” She won a supporting actress Emmy in 1994 for “Oldest Living Confederate Widow Tells All.” She was nominated for Emmys several other times, including for “Roots,” “King,” “The Marva Collins Story” “Sweet Justice” and “A Lesson Before Dying.”

Ms. Cicely Tyson stayed on the move. I pray I can walk in her shoes, moving and motivating shining her light  and having her say. I read that in recent years, she was part of a panel discussion for “Cherish the Day,” an eight-episode OWN anthology series created and produced by Ava DuVernay. In 2016, President Barack Obama honored her with the Presidential Medal of Honor and he said, “In her long and extraordinary career, Cicely Tyson has not only succeeded as an actor, she has shaped the course of history.”

Not bad for one who came from a lowly status and worked her way up to be, in my humble opinion, one of the greatest actresses of all time in Hollywood and on Broadway, who with her  influence in roles like  “A Woman Called Moses” led many to the   promise land of stardom just like Ms. Harriet Tubman led many from slavery to freedom. Farewell and thank you Cicely   Tyson for blessing us with your grace and greatness.