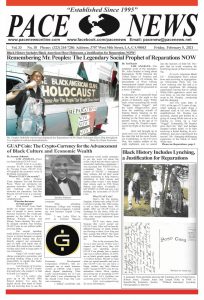 LOS ANGELES—The prophetic work of the legendary Mr. John Peoples to bring about Reparations NOW between the United States of America and American Black US citizens, the descendants of West African Americanized chattel slaves and their children will be presented in a series of articles.

Awakened out of a peaceful sleep in the dead of the night to the shouts of distinctly angry White male voices screaming the words “Nigger, Nigger, Nigger”, and the warm orange-yellow glow from the crackling sounds of leaping flames hanging on the extremities of a wooden cross burning on the front lawn of his parents’ house, at the age of 10 years young Mr. Peoples experienced the fright of his short, little life.

Born and brought up in racist Jim Crow Suffolk Virginia, the state that led the racist Southern Confederacy in the US Civil War, this sudden middle of the night nightmare was so seared into the memory of little Mr. Peoples that he could visualize the horrifying shock of that cross burning.

As every American Black US – Emancipated Slave citizen born and surviving in segregationist, Democratic Party led, Jim Crow America who has had a or several significant life changing experiences having due to certain White folks oppressive, racist rule over them, so was this harrowing event to Mr. Peoples…awakening and life changing.

Just five years later, in 1955, at the age of 15 years of age, while walking at night along a darkened road in his own Black neighborhood, Mr. Peoples was accosted, chased and hunted by a group of young White men in a car looking to string up a lone “Nigger”.

Fortunately, Mr. Peoples gave them the “slip” and perhaps escaped certain death, or at least receiving a brutal beating, he nevertheless, had just experienced his second life changing-challenging experience at the hands of racist White men.

Ironically, 1955 was the very same year that a Black       Chicago teenage boy by the name of Emit Till who visiting           Mississippi was not as fortunate as young Mr. Peoples, but rather some thuggish White KKK      gangsters kid-napped and brutally beat, murdered and mutilated him beyond recognition, throwing his lifeless body into the Mississippi River to be eaten upon by huge catfish.

Shortly after the cross burning incident, Mr. Peoples and his family moved in with his grandfather who owned a small estate not too far from his        previous home.

There at his granddads house he remained until he was 19 years of age, at which time he began his many travels throughout the United States, eventually     landing Mr. John Peoples in Compton, California.

It is in Compton, the home of so many other legendary figures of art, sports, politics and entertainment.

It is also where in the last13 years of hard and lonely work, Mr. Peoples emerged as the legendary social prophet of       Reparations for the Black Slave Holocaust committed under the Jurisdiction of the United States governments against West African Americanized chattel slaves and their children. Though Mr. Peoples had the issue of Reparations on his heart and mind since he was a child being inspired by adults talking about the government must eventually pay for the damages done to the slaves, it was when he created and implemented a his idea of a transportable Black Slave   Holocaust Ship” truck and float.

In was between 1992 or 1993 that Mr. Peoples faithfully moved and displayed the Reparations NOW Black Holocaust Slave Ship throughout Los Angeles in various demonstrations, parades such as the Martin Luther Kingdom Day parade, Kwanzaa  and Marcus Garvey Day, along with parking it on the street in front of churches, to even leading Civil Rights Marches against illegal immigration, just to name a few.

Generally dressed in    raggedy clothes (* typically overalls) depicting the attire of slaves and crop sharers top with his “hillbilly” hat over his grayish white dread-locked head, it turns out that since he was a young man, even an early adolescent teen, Mr. John Peoples manifested a talent for mocking and impersonating folks with witty humor.

Known in some circles of society as the “Black Hillbilly” sharing entertainment stages with such greats notables as soul singer Little Richard, comedian George Kirby, Muhammad Ali, and many more folks of notoriety, Mr.      Peoples elected to not live the   lavish world that entertainment can gender, but rather he committed himself to humble living in order to focus on Reparations NOW.

“This Is Mr. Peoples” a legend of a man who comes around once in lifetime suffered at the hand of certain African      American ministers and others ignorant, insecure individuals who  attempted to dismiss him as an out-of-touch, old coot from Virginia somewhere.

Mr. John Peoples left a legacy as a fighter for what he believed in and Reparations stayed on his mind for all the wrongs done to his kind. In his memory, the legacy he left must not be forgotten and his vision must become a reality for REPARATION NOW! NOW! NOW!