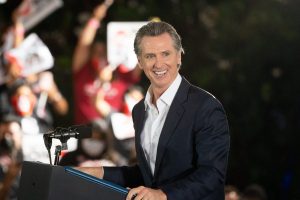 LOS ANGELES—After the landslide sweep to win big in the recall election on Tuesday, the people showed up and showed out for Gavin Newsom against what was dubbed as the “No On The Republican Recall” based on the heavy-handed     tactics by the last-minute Republican candidate Larry Elder, who at first was known to trump the Libertarian card until one of his right-wing conservative radio buddies, Dennis Prager, convinced him to throw his hat in the ring to run against Newsom.

Thanks in a large part to the African American Voter Registration, Education, and Participation Project (AAVREPP) who led the charge in the Black community with hitting the phones and streets to spread the word about the special election said Jada Montemarano reporting on the recall election for Spectrum News 1 in a news report entitled, “Black voters could make or break Newsom recall election”

The public, the people and their power, their Black Power, won out with their voices and their votes. Gavin Newsom reigns with a landslide victory and the people can now say, “We got Newsom, Not a Nuisance for Governor.”

It was said in last week’s article that a nuisance is a person, thing, or circumstance causing inconvenience or annoyance.

By Wednesday morning, the people of California had swept the nuisance out of the way to win the race with an unquestionable 63.8 percent landslide victory to do away with all the annoyance and inconvenience this recall election has caused for Californians in the midst of a world-wide pandemic.

Let’s hope that now those who found it to be necessary to spend hundreds of millions of dollars on a recall election will now put away the partisan politics and come to the political table and sit to solve the issues of homelessness, healthcare, education, infrastructure, poverty, prison reform and still, the pandemic, or will they continue to complain and to cause Californians financial pain like the Sept 14 unnecessary political recall game because in the end we got Newsom, and not a nuisance for governor and everything remains the same at least for now.