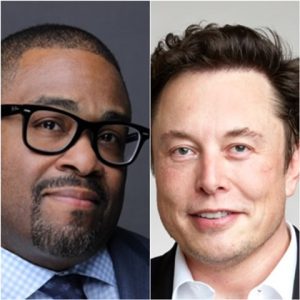 NAACP California-Hawaii Conference President Rick Callender says he supports the decision of the California Department of Fair Employment and Housing (DFEH) to slap automaker Tesla Motors with a discrimination lawsuit. The complaint accuses the company of “systemic racial discrimination and harassment.” Callender says “racism is rampant” at the electric vehicle manufacturer’s plant in Fremont, an East Bay city located about 44 miles east of San Francisco. “We demand a racist free workplace. Business & Gov. orgs should know racist behavior is not tolerated in CA. Who thinks they should own a @Tesla now?” tweeted Callender after DFEH filed the lawsuit Feb. 9. “Segregation at the Fremont factory, along with the absence of Black and/or African Americans in leadership roles, has left many complaints of rampant racism unchecked for years,” says the lawsuit filed with the Superior Court of California in Alameda County. 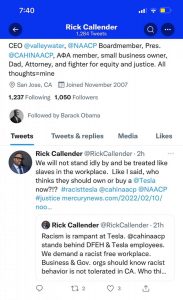 “As early as 2012, Black and/or African American Tesla workers have complained that Tesla production leads, supervisors, and managers constantly use the n-word and other racial slurs to refer to Black workers,” the complaint continues.  “They have complained that swastikas, “KKK,” the n-word, and other racist writing are etched onto walls of restrooms, restroom stalls, lunch tables, and even factory machinery. They have complained that Black and/or African American workers are assigned to more physically demanding posts and the lowest-level contract roles, paid less, and more often terminated from employment than other workers.” The Rev. Amos Brown, co-chair of the African American Empowerment Council, vice-chair of California’s Task Force to Study and Develop Reparation Proposals for African Americans and Pastor of Third Baptist Church in San Francisco, also condemned Tesla. “The struggle continues. Racism is not dead. This is just another virus that is rearing its ugly head,” he said. “It is time this nation and corporations admit, atone, and act to end racism so that there will be equality of opportunity for African Americans.” 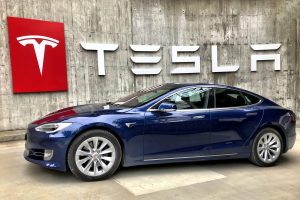 More than 15,000 people work at the Fremont plant, according to the DFEH lawsuit. Blacks make up about 20 % of workers on the assembly lines and about 3% of corporate employees. There are no Black executives. The lawsuit also alleges that, in the past, there have been few opportunities for advancement for Black employees, and they are disciplined more and more harshly for violations than other races. “As the former director of Rainbow Push Coalition’s Automotive Project, I know how imperative it is that we continue to call out discrimination in any form.

I’m not surprised because this is indicative of their culture. Tesla doesn’t support communities of colors in the way in which it does business,” said Glenda Gill, a member of the Black Women’s Collective strategy committee. “Recently, I attended an automotive industry event and Tesla won three top ethnic markets awards. They didn’t show up or acknowledge the recognition. That says a lot about their culture and people in leadership.”

Kevin Kish, Director of DFEH, says the agency has received hundreds of complaints from Tesla employees. “The facts of this case speak for themselves. DFEH will continue to take steps to keep workplaces free of harassment and racism,” he said.

Tesla responded to the DFEH lawsuit in a blog post, calling the legal action “misguided” and stating that the claims date back to a period between 2015 and 2019. “The DFEH has decided to sue Tesla instead of constructively working with us. This is both unfair and counterproductive, especially because the allegations focus on events from years ago,” Tesla’s response reads. “Tesla strongly opposes all forms of discrimination and harassment and has a dedicated Employee Relations team that responds to and investigates all complaints,” the post continues.

Yet, in 2020, DFEH says it received 31 Tesla employee complaints citing discrimination based on race, gender and other factors. Last year, a San Francisco jury ordered the company to pay a Black employee, Owen Diaz, $137 million. Diaz, who was an elevator operator, says he was traumatized because he suffered racial abuse while working for the automaker.

“They would call me boy or ‘n-word push the button on the elevator,’” Diaz told KTVU in Oakland. “And when I was complaining to Tesla’s upper management and letting them know what was going on, it’s like I became public enemy number one.” Diaz said the verdict in his case was a message to Tesla CEO Elon Musk: “Clean your factory.”