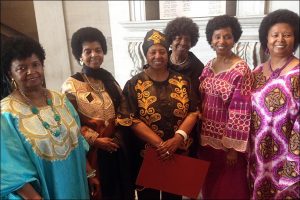 Editor’s Note: The Lee sisters’ story is a critical part of history and as women they should continue to be honored as “Light Bearers” in some of the darkest days of Black history, the Civil Rights era. They detested the degraded state they found themselves in the South and in the sixties so they fought by using the power of protest. Lanny Vaulx Jr., a relative of the Lee sisters and one who is proud of their accomplishments, enlightened me on the Lee sisters courageous fight during one of my visit to Memphis recently. As we celebrate “Women’s History Month”, PACE NEWS pay tribute by reprinting this historical piece of history about these women of grace and substance who stood up against the system of Jim Crow.

By Sam Stockard
From the Memphis Daily News

During the civil rights era, the Lee sisters wouldn’t have been welcomed at the State Capitol. Half a century later, legislators honored the Memphis family on the House floor, recognizing their efforts in the 1960s when they participated in protests across the city and Southeast as high school and college students.

Ultimately, the sisters were arrested 17 times, earning them the title of “Most Arrested   Civil Rights Family” by Jet magazine in 1965. It started with Ernestine Lee Henning, now of Los Angeles, in March 1960 when she joined sit-ins at Cossitt and Peabody public libraries as a student at Owen Junior College, now LeMoyne-Owen College. She was arrested for daring to go to the libraries where black residents weren’t allowed, and that started a family trend. Said Brenda Lee Turner, “We considered going to jail as a badge of    honor, because we considered it a righteous cause, and we would do it again.” In addition to participating in Memphis sit-ins at lunch counters, theaters and libraries, Lee sisters went to the 1963 March on Washington, the 1965 Selma march over the Edmund Pettus Bridge and the 1966 Meredith

March Against Fear in Mississippi.

The NAACP honored their efforts in 1965, and in March the African American Museum of Memphis and Shelby County Historical Commission erected a historical marker recognizing their achievements at the corner of Main and Gayoso streets in Memphis. The Legislature honored them with its own resolution this week.

“We’re grateful to the General Assembly and particularly to our two representatives here who initiated this effort,” Henning said, referring to Rep. G.A. Hardaway and Rep. Johnnie Turner, both Memphis Democrats.

Henning acknowledge quite a transformation has taken place in society since their younger years, noting many people in authority at the State Capitol wouldn’t have welcomed them 50 years ago.

Rep. Turner is proud of her friendship with the Lee sisters and said many people thought she was part of their family because she resembled them, which she enjoyed because “they were all good-looking.”

“This is really significant to me, not only because of the personal relationship I have with them, but it’s an honor long overdue, and it’s one of the highest honors the General Assembly could bestow because of their uniqueness,” said Turner, who participated in the civil rights movement as well.

“Not only are they unique to Memphis and Tennessee but to the whole United States.”

Turner pointed out she and several of the Lee sisters were “blackballed” because of their involvement with civil rights protests and arrests in that era.

She was told she would never be hired to teach in Memphis City Schools because she was a “jailbird.” And Elaine Lee had to move to Arkansas to find work.

But while Turner said her mother told her not to join sit-ins and protests, the Lee sisters’ parents, Robert and Alversa Lee, encouraged them to participate. Their mother’s father was born into slavery and lived until Elaine was 12 years old.

“They made many trips to jail and to juvenile to get us out of jail and juvenile,” said Sandra Lee Swift. “Our parents understood and encouraged us because they knew that our cause was just and it was a righteous cause and they didn’t mind because they knew it had to be done.” Hardaway pointed out he, Turner and 15 other African-American legislators are able to serve today in the General Assembly because of the efforts of the Lee sisters and those who joined them.

“When you put what they did in context, what they did could get you killed, it could get you beaten down. It could get you institutionally murdered. That means done under the color of law,” Hardaway said. “But they didn’t do it once. They kept doing it and kept doing it, and to put your whole family out there at risk, that takes special people. It takes a vision, it takes those morals and convictions, but that courage you need to fulfill it and bring it to action is what’s most admirable about them.”

Sam Stockard is a Nashville-based reporter covering the Legislature for the Memphis Daily News. He can be reached at sstockard44@gmail.com.