From the beginning, some Americans have been able to move more freely than others 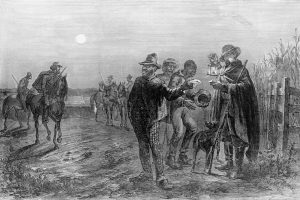 They were called patrollers or, variously, “paterollers,” “paddyrollers,” or “patterolls,” and they were meant to be part of the solution to Colonial America’s biggest problem, labor. Unlike Great Britain, which had a large, basically immobile peasant class that could be forced to work for subsistence wages, there weren’t enough cheap bodies in America to do the grunt work. If you were a planter looking to make your fortune in rice or tobacco—the New World’s cash crops—you had to size up to industrial scale, and for that you needed bodies, armies of bodies, a labor force that could be made to work for terms no less brutal than those inflicted on the miserables of Europe.