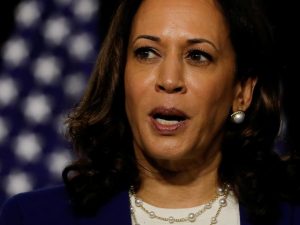 Harris has built up so many expectations across the world, but is it fair? ( REUTERS )

When Joe Biden said of Kamala Harris, “Her story is America’s story”, it felt like 2008 in India all over again. I was editor of the Sunday Times of India, the country’s largest English-language newspaper, and based in the Indian capital. My husband was cultural attaché at the US embassy in New Delhi. Barack Obama had just won the November 4 election and everywhere we went, Indians expressed great enthusiasm for America’s new president. As eight years of President George W Bush’s tough-bitten, charmless, cowboy-booted brand of diplomacy drew to a close, America’s professional diplomats could finally look ahead to better days. The world liked America again.

All too much, in fact. In Aligarh, a city 150km away from Delhi and known for the university founded by a 19th century Muslim reformer, excited students told us that Obama owed it to the world to sort out a number of things – not least, the Palestinian issue – else he would have ignored his mandate of global goodwill. Many of the students said they felt Obama was somehow their president too because he had spent his childhood in the Asia-Pacific region, his skin colour made them feel a connection, and because he bore the middle name “Hussein”.

Back at the paper, we ran a lyrical Sunday special complete with doves of peace and headlined it “The audacity of hope”, in unsubtle reference to the title of Obama’s own book. One of the pieces on the page was about “desperately seeking our own Obama”, which is to say the election of a Dalit or lower-caste person to India’s highest political office.

As a template for progressive change, Obama really did raise the bar for India and everywhere else. The problem was the enormous weight of expectations that came with America finally having a president who looked different from the 43 that had gone before. The fantastical belief was that Obama would be a president of all the world, putting America’s interests after those of other countries.

When we subsequently left India for Afghanistan, there was a similarly long laundry list for Obama from ordinary Afghans. It was eight years after the US had invaded Iraq on a false prospectus and young Afghans wanted Obama to end what they believed was an American campaign of unjust wars in Muslim countries and the unfair stereotyping of Muslims.

In the early years of his presidency, Obama’s overseas poll numbers were routinely in the 90 per cent range, with the Pew Research Center finding people in disparate parts of the world expressing utmost confidence that Obama would “do the right thing regarding world affairs”. It was plain to us as Americans that all these eager non-American non-voters would be disappointed. They were. The discontent was more crushing because Obama conducted himself like any American president, despite looking like no other president had.

A similar sort of mismatch between the world’s expectations and the inherent limitations of high American political office is brewing with respect to Kamala Harris. As the daughter of a Jamaican-American economist and an Indian-American cancer researcher, Harris is burdened with the exuberant support of people from two countries in different hemispheres. Having spent part of her youth in Canada’s Montreal, Harris, like Obama, has a third international connection. Cue the congratulatory tweet from the mayor of Montreal when Biden named Harris to the ticket, as well as her Canadian high school’s quickly stated public pride in its alumnus. Then there is former Jamaican prime minister PJ Patterson’s claim that his country is “excited” by Harris’s political ascent.

But it is the Indian reaction to Harris’s rise that will be noteworthy, especially if the Biden-Harris ticket triumphs on November 3. It is unsurprising that Shashi Tharoor, a senior member of the main opposition Congress Party, finds it “thrilling” that someone of Indian ethnicity could be “a proverbial heartbeat away from the presidency”. A vice-president Harris, of Indian descent or not, may be much less thrilling for India’s governing Hindu nationalist Bharatiya Janata Party (BJP). In December, Harris was critical of the BJP-led government’s attempt to influence a US Congress meeting on the disputed territory of Kashmir. In September, she said Kashmiris “are not alone”, the US is “watching” for potential human rights abuses and that it will lead with “our values”.

The BJP’s official silence on Harris’s selection as vice-presidential nominee speaks to the limits of how crowd-pleasing an international pedigree can really be, especially when it comes to the cut and thrust of geopolitics and ideology. It has fallen to just one senior BJP leader to offer an anodyne salute to the “first Indian and Asian woman to get the nomination as official VP candidate”.

Of course, any real problems between Harris and the BJP are still some way down the line. First, Biden-Harris would have to win. If they did, it’s a fair guess that millions of Hindutva-minded BJP supporters in India, the US and elsewhere are likely to be disappointed that Harris is too western and multicultural to go along with the narrow exclusivist agenda set by the party.

For now, though, many Indians are celebrating the triumph of one of their own in the world’s most powerful country. As with Obama, Indians, Jamaicans (and no doubt, nationals of many other countries) see Harris as a sign of America’s inspirational inclusiveness.
It’s a good sign that non-American non-voters felt a kinship with Obama and now with Harris. That said, too much enthusiasm for a US presidential candidate may be as big a problem as too little.

Rashmee Roshan Lall is a writer on world affairs. She blogs at www.rashmee.com