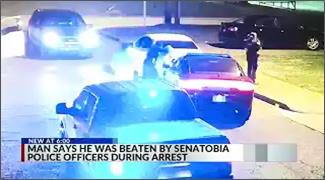 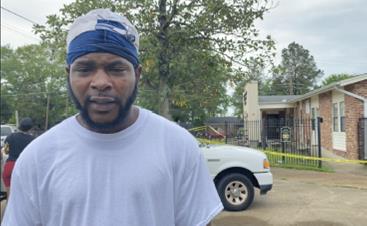 Andre Burton speaking with PACE NEWS about how the policemen beat him.

“With few exceptions, southern leaders proved that their devotion to segregation and white supremacy was far greater than the patriotic allegiance they routinely professed to constitutional government. 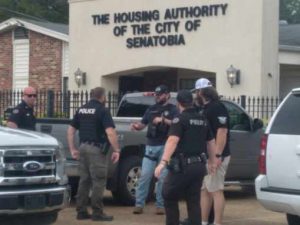 Senatobia, MS.-As the founder and Publisher of PACE NEWS, a Los Angeles County and City legally adjudicated newspaper of general circulation since 1995 and a native Mississippian born and raised in Senatobia on Hudson Street in Newtown and who happened to be visiting on Monday, April 25, 2022, when I was driving near the community center around the corner from Hudson Street which is the Senatobia Housing Authority’s headquarter, I was amazed at the show of force with numerous police officers all on hand to retrieve the surveillance footage that’s placed through out in Newtown these days supposedly as a crime prevention, however, this time it appears from the reports I gathered from local citizens the crime appear to be more against the police officers than the usual suspects, the citizens themselves. 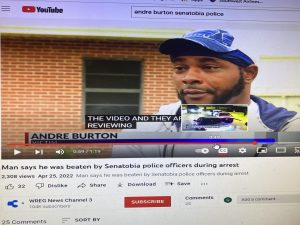 According to interviews with Senatobia residents, Sherrie Harris, Linda Walker, and even Mr. Andre Burton, the Black man seen on the video being beaten, said the police abused and used excessive force and now they were at the Housing Authority to get the video of the incident from the director but she refused to release it without a warrant. The scene and all the yellow-tape looked like someone had gotten shot or something. 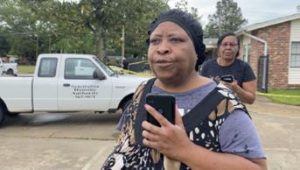 Sherrie Harris and Linda Walker residents in Senatobia, Mississippi at the scene on Monday, April 25, 2022.

Quite frankly, when initially passing by that is exactly what I thought. But it wasn’t someone dead but it was the Senatobia police who had come to pick up the surveillance video as they allegedly had done many times before but on this occasion they were asked for a warrant and subsequently was denied but not before they had, according to the director, “pulled her by the wrist to remove her from the facilities and roped off the center denying anyone entrance in or out until they had received a search warrant to retrieve the video of Mr. Burton being beaten by the officers after he said he had complied with their request. He said, “I did what they asked me and I still was beaten.”

His girlfriends 14 year old son was also arrested the same night and held. These reports and how the director as well as a local Attorney Mildred Lesure was treated and disrespected is the story and certainly not the fact that Attorney Lesure did not reveal her name to distract from the real issue which was that Mr. Burton was said to have been beaten and his civil rights appear to have been violated as well as the director of the Housing Authority for standing her ground and not allow the police to search and review the video without a warrant. 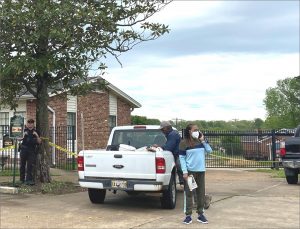 Attorney Mildred Lesure holding a copy of PACE NEWS as she makes a phone call outside of the Senatobia Housing Authority headquarters on Monday, April 25, 2022 in Senatobia, Mississippi. Photo by Gloria Zuurveen

The video showed evidence of what happened to Mr. Burton and how the policemen, one at first and then there were two after one of them drove up to the scene, jumped out of  his truck and ran toward Mr. Burton and began hitting and assaulting him, who in the initial video I witnessed was complying as best as it seemed possible considering the position he was in as the first police had him mounted up against the car, however, the second policemen who jump out of his truck commenced to beating Mr. Burton upon his initial contact. These images were not described by the Senatobia Police Chief when he narrated the seemingly edited version of the original video that thousands of people have watched and witnessed on Facebook and several broadcast news outlets.

The actions by the police looks to have been excessive force even though the April 26th edited and narrated video posted on Senatobia Police Facebook featuring the Chief Richard Chandler was reported differently. In the narrated version, the focused appeared to be about the melee which occurred on the 19th of April and not the beating of Mr. Burton who complied with law enforcement and who, along with the Tate Record publisher, who also appear to have switched the focused from the primary to the secondary, which was that Attorney Lesure would not give her name. 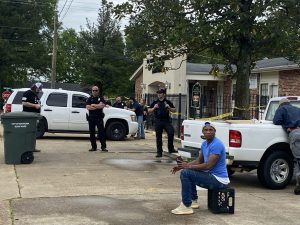 The real issue of the day that I saw when I drove by, stopped, and got out of my car to see what was going on where on one side of the yellow tape were Black people with video cameras all directed to the other side of the yellow tape with mostly blue uniformed white police officers except for one heavy set one who was wearing a grey T-shirt emblazoned with 1776 and Khaki shorts and a baseball cap with long hair trailing from beneath it to his back.

He spoke with hostility as he commanded that I stop taking pictures in the street. He said it was violation.

The cameras located in the community may be needed but this time they came in right on time to see what’s really going on.

From the looks of the original video, Mr. Burton was not the problem, the way he was treated is the greater problem. Attorney LeSure not giving up her name is not the problem but the way she was disrespected and treated is.

The director over the Housing Authority of Senatobia is not the problem, but the way she was treated is. She is to be commended for standing her ground and now is the time for the community to bind around and stop the abuse in their town, my town, Newtown.

On Thursday, Chief Chandler is said to be looking into having Mr. Burton’s parole violated and the case is said to be in the hands of the FBI for further investigation. For more visit  us @www.pacenewsonline.com for more of the Southern Truth.