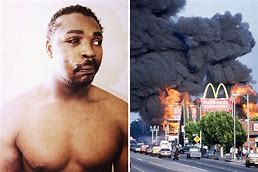 My friend, Larry Morris a former resident of Los Angeles and who now lives in Memphis, Tennessee, sent me a link today called “Rodney King Blues”. He sent it after seeing the unrest today that reminded him of what happened in 1992.

But today, it’s the cold-blooded murder of an innocent black man, George Floyd, at the knee of Derek Chauvin, the “Knee Killer” who has been charged, but not as premeditated or first-degree. In all of the videos I’ve seen they all show that Chauvin appeared very comfortable resting with his knee on the neck of Floyd, so much so, that he had his hands in his pockets and held the position for nearly 10 minutes, cutting the living life out of George Floyd and now we are in the midst of a curfew because of the protest and violence all across the land in reaction.

This is what happened after the not guilty verdict of the officers in the Rodney King’s case and trial. Rodney King was beat senseless, so much so, that after he was, somewhat, able to speak, he said, “Can’t we all get along?” He made those words famous after a tragic ordeal, the beating of him in the dark of the night.

Here we are today, since April 29, 1992, after the unjust balance of justice swung in the favor of the vicious beaters of Rodney King, the community was outraged then and today we see the same level of outrage all across the land.

Larry Morris, a videographer and businessman has a cadre of history he has filmed over the years and now witnessing the parallel events of police brutality he sent me a clip from his archives he recorded in 1992.

I want PACE NEWS readers to hear, see and to ponder, “What must be done to stop the perpetual, racist actions of others, especially by those, the police in particularly, who are suppose to protect and serve us and not be among those who are charged with beating and murdering Black people in America?

The murdering of black men and women, from Mitrice Richardson, Tyisha Miller, Sandra  and all the others is becoming the headline news on just about every major network and cable TV show constantly, from CNN, FOX to MSNBC, it’s not just in America but Globally. To be angry over injustice is natural, but to polices across the land murder is too, just as natural, when it comes to murdering a Black woman or man, especially a Black man who calls for his mamma and saying “I can’t breath”. It appears to be a natural practice to get praise among the crew in blue.