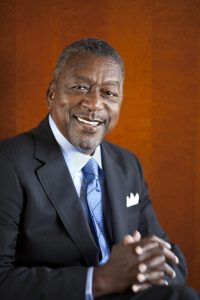 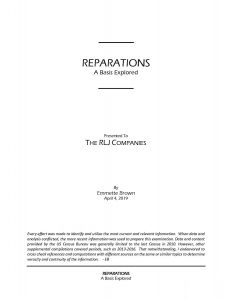 Johnson Calls For $14 Trillion In Reparations – Not Just To Atone For Past Sins, But To Cause This Nation To Live Up To What Was Once Called American Exceptionalism

BETHESDA, Md., June 1, 2020 /PRNewswire/ — Is $14 trillion too much to ask for the atonement of 200 plus years of brutal slavery, de facto and de jure government-sponsored social and economic discrimination and the permanent emotional trauma inflicted upon black Americans by being forced to believe in a hypocritical and unfulfilled pledge that “all men are created equal”? This is an existential question that this nation has failed to answer since the end of the civil war. However, this question demands an answer today if we, Black and White America, are to coexist as a United States for all people.

The questions being asked today, in light of the alleged inexplicable murder of George Floyd, are how do we bring unity to this nation and how do we provide justice on behalf of Mr. Floyd and his family. The answer to the question of how we deliver justice for Mr. Floyd is straight forward. Demand that those being charged in this case be presented to a court of law and that the court render the appropriate verdict and punishment.  That has been my answer to every tragic situation like this; and, regrettably it will be the answer when this happens again, as it most certainly will. Now, to the question of how to bring unity to the country.  The sad fact of the matter is on the issue of racial unity, this country has never been united. In my opinion, the only way to unify this nation and achieve racial equality and harmony is for this country to implement full and total economic reparations in the form of direct cash payments, over the next 10 to 20 years, to every descendent of African American slaves.

The economic chasm of wealth and income inequality between Black and White America was, without question, derived from slavery and its aftermath.  It is a visible stain on this nation’s economic and social mobility.  Reparations, in the form of monetary recompense for damages, is not new in this country or the world.  It should be completely understood in a nation built on a foundation of capitalism that, no one should be deprived of the benefits of their labor without due process of law.  Therefore, the purpose of reparations, as presented here, is to acknowledge to 40 million Black Americans, the decedents of slaves, that you are owed damages for the evil that was visited on your ancestors.

I call upon all of White America who truly believe and wish to show to their Black fellow citizens that they do not harbor the insidious belief of white supremacy by accepting, understanding, and embracing the fact that economic racial inequality between whites and blacks is the unstable fuel that inflames and propels racial distrust in this country. The racial conflict that plagues our nation today, unless put to rest by a full and total commitment to reparations, will cause more devastating damage, in the long term, to the moral fiber our country than any virus-driven pandemic will ever do.