LOS ANGELES – After a nationwide search, the Board of Directors of Western Center on Law & Poverty has chosen Crystal D. Crawford to be its next Executive Director. Crawford is currently a program director at The California Wellness Foundation, a position she has held since 2012. Crawford will be the first Black woman or woman of color to serve as the organization’s Executive Director. 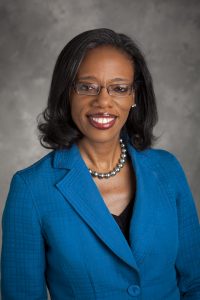 A seasoned leader with more than 20 years of senior management experience in the legal, philanthropic and nonprofit sectors, Crawford has played a pivotal role in advancing the health and economic security of low-income Californians, women of color and communities of color.

At Cal Wellness, she developed and led the organization’s groundbreaking Women’s Initiatives, a multi-million dollar program that amplifies the voices of women of color and provides philanthropy and policymakers with a vision for how to advance the health and economic security of women of color.

“It’s an honor to lead Western Center in this season of renewed community commitment to fighting systemic racial and economic injustice,” said Crystal. “I am proud to stand on the shoulders of prior Western Center Executive Directors, including social justice heroes Professor Derrick Bell and Judge Terry Hatter. Right now, we find ourselves in the battle of a lifetime, so I’m energized to join forces with this smart, passionate team in fighting for justice. In the words of Ella Baker and Sweet Honey in the Rock, ‘We who believe in freedom cannot rest until it comes.’”

Founded over 50 years ago in the wake of the Watts rebellion, Western Center remains committed to building upon its roots in the fight for racial justice.

The last several years have been a whirlwind of assaults on past civil rights wins, and Western Center has been on the forefront of advocacy and legal battles at the local, state and federal levels.  With Crystal’s leadership, Western Center will continue to mobilize its considerable resources, networks, and power to change the systems and institutions that perpetuate systemic inequality.

“Crystal is a visionary who brings stellar operational and strategic leadership expertise — along with a deep commitment to valuing community voices — to this position,” said David Elson, Co-Chair of Western Center’s Board of Directors. “We’re confident that she’s the perfect person to lead us as we continue our fight to upend the systems that keep people in poverty.”

Prior to her work with Cal Wellness, Crawford was CEO of the California Black Women’s Health Project, the only statewide organization devoted to improving the health of California’s Black women and girls through policy, advocacy, education and outreach. Prior to joining CABWHP, she served as Legal Director for the Alliance for Children’s Rights. Before working in the nonprofit, public interest sector, Crawford was a litigation associate at Manatt, Phelps & Phillips and a summer associate with major corporate law firms in Los Angeles, Boston and New York. She began her post-collegiate career as a public school teacher in Harlem.

Crawford is active in the leadership of numerous civic and community organizations. She sits on the five-member Los Angeles County Public Health Commission and is a member of the Women’s Health Policy Council for the Los Angeles County Office of Women’s Health. She also sits on the Dartmouth Alumni Council and serves on the boards of the Black Alumni of Dartmouth Association, the Black Women Lawyers Association of Los Angeles Foundation and Funders Concerned About AIDS. She previously served on the boards of Dartmouth College’s Rockefeller Center for Public Policy, the Tucker Foundation at Dartmouth College, Health Access California, SisterSong, and on the advisory council for the California Breast Cancer Research Program.

Crawford is the recipient of numerous awards, including the 2009 Advocates’

Award from Western Center, the 2012 PowerPAC Award from the Los Angeles African American Women’s Political Action Committee, and the 2015 Outstanding Women of the City Club Award.

Originally from Harlem, New York and Teaneck, New Jersey, Crawford earned her bachelor’s degree in history from Dartmouth College and law degree from the New York University School of Law, where she was an Arthur Garfield Hays Civil Liberties Fellow.  She is admitted to the bar in California, New York and New Jersey.

Crawford will transition from her current position at Cal Wellness and start with Western Center in early August. She will be based at Western Center’s headquarters in Los Angeles.