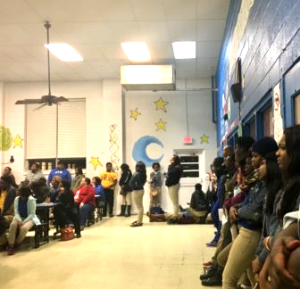 Kelsey Davis, Mississippi Today
Students stood in a packed meeting to hear which schools will close within the district.

Montgomery was born enslaved on May 21, 1847 to Benjamin Thornton and Mary Lewis Montgomery on the Hurricane Plantation at Davis Bend, an area along the Mississippi River near Vicksburg, Mississippi. The Hurricane Plantation was owned by Joseph E. Davis, older brother of  President Jefferson Davis. Benjamin and Mary were unusual for the era; they were both born in Africa, they were both literate, and had access to Joseph Davis’s extensive library. They passed that literacy on to their son Isaiah because they recognized the value of education in building a community. So in early 1888, Montgomery and his sister, Virginia Montgomery, began holding classes for children in his home. This school developed into the Mound Bayou Public School.

In 1912, Booker T. Washington said that Mound Bayou was ‘‘not merely a town,but at the same time and in a very real sense of the word, a school. It is not only a place where a Negro may get inspiration . . . but a place, also, where he has the opportunity to learn some of the fundamental duties and responsibilities of social and civic life.’’  It is this powerful and provocative legacy of Mound Bayou that must be sustained and maintained and especially in the climate of racial awakening about Blacks and its American history.

Digging a little further, I found in my collection of books and documents, the African American Historical News Journal: 178 Years of Our Country’s History As Documented By Historical Newspaper Articles. In the Journal dated July 15, 1906, an article was written from Baltimore, Md., Dec. 18, 1909 titled: Black Towns, North and South. The Baltimore Afro-American newspaper reporter, when describing the Negro town of Mound Bayou, Mississippi said, “Half the visitors at a recent business meeting in Mound Bayou  reportedly came just “…to see this real, live and hustling Negro city.” This is the city of Mound Bayou that Montgomery made a reality for generations after him and it is these children of Mound Bayou that must be saved. They must be saved from a potential perpetual prison pipeline. The leaders of North Bolivar Consolidated School District and the Mississippi State Supreme Court have decided to close down the school at Mound Bayou and transfer the tax revenue. Their action appear to be a violation of their human and civil rights too.

Teachers, lawyers, plumbers, carpenters, accountants, bricklayers and cabinet makers, skills and more skills are needed in this predominantly Black town  that is according to the 2000 Census has a racial makeup of 98.43% African American population. Mound Bayou is fertile and ripe for growing not just crops of corn, peas, tomatoes, and others fresh gardening to put in a pot, but it is ripe for growing exceptional families like those that has sustained it all these years and whose history must not be forgot.  Mound Bayou  needs labor galore, yes, dollars are good, but the town needs so much more.

Most of all, Mound Bayou needs their young girls and their young boys to come back home from the school down the street while theirs is under utilized because the superintendent and others have voted to forget about all the history and they took sides to erase all of their culture and Black pride.

Further research revealed the phenomenon of African American educational success in an under resourced community in the Mississippi Delta which was conducted by J. M. Stevenson, W. Lee and C. Crockett professors at Jackson State University, a Historical Black College and University, (HBCU). The study entitled:  From the ‘Cotton To’ Fields of Utopia to the Corridors of the University”  was an eye-opener and a revelation that the children of Mound Bayou needed salvation. Yes, they needed to be saved from the wrongful acts of willful and intentionally holding the children of Mound Bayou back. The children of Mound Bayou are exceptional and extraordinary; so much so, they are leading in academic in Mississippi state schools. 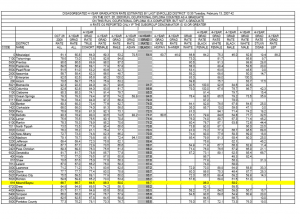 According to the Jackson State University Study, educational disparity between African Americans and Whites is a longstanding problem in the United States and has been the topic of research conferences, public policy agendas and educational initiatives for more than thirty years. The academic performance of African Americans, even in the most affluent communities, lags behind Whites. Research shows that factors of race and income are contributors to this racial disparity. The gap in academic performance between African Americans and Whites has, in many ways, become an expected condition or a societal-cultural norm. Mound Bayou is a community founded by former African American slaves and 42% of  its families are below poverty. Community folklore suggests that this remarkable town has, and continues to have, more high school graduates go to college than any other town in Mississippi.

However, even after the record reflects remarkable and phenomenal statistics shown in the study, the children of Mound Bayou were taken away. It appears to have been by design in order to stop the production of the Mound Bayou’s kind. Educated, motivated, and elevated with little financial resources but they have so much more and it’s rooted in their minds. The minds of exceptionalism and extraordinary too, we must stop the intentional and willful attack on the Mound Bayou children and let’s help bring them back.

Kelsey Davis, Mississippi Today
A packed room filled a school board meeting Monday to hear which schools will be closed in the North Bolivar Consolidated School District.

The parents and people of Mound Bayou are seeking to take their fight higher, they need your help for legal defense funds, they are seeking justice at the U.S. Supreme Court in hopes that it will listen to hear the truth about the children of Mound Bayou and how the school district leaders and the Mississippi state court appears to be corrupt. They have shown, by their actions, that they do not care about the children of Mound Bayou and its students high academic achievements or they would have left the children where they were and not forced them out of their own community school, without any public notices before they closed the doors claiming a deficit and low enrollment. to fill up a school farther down the street furthering  segregation  instead of full integration and leading to defeat, but not only that, it is known that the school farther away has a shameful low-academic rating, not an A, like the children of Mound Bayou with their documented academic success, but an F, not for fabulous, but failure.

This is a mockery and must be stopped. The research, graphs, charts and testimonies from the Jackson State University Study is a testament to the extraordinary features in high academic achievements that Mound Bayou students received from their profound and powerful teachers. Time is of the essence and not a moment to wait, your help is needed to bring the children of Mound Bayou home before it is much too late.