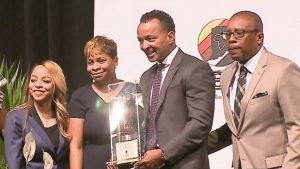 On Sept. 19, 2019, the stations were acquired from Nexstar Media Group by Circle City Broadcasting, a minority-owned company led by Hoosier DuJuan McCoy.

When the stations were owned by Nexstar, “AT&T paid Nexstar for the right to retransmit the stations’ signals, and passed on those charges to its customers in the Indianapolis area,” according to the lawsuit.

“The very day Circle City purchased WISH-TV and WNDY-TV, AT&T halted all retransmission payments for those stations, after paying full market price to the prior owner of the stations for years,” the lawsuit alleges.

AT&T has since “offered zero compared to the rates it paid the prior broadcaster, Nexstar,” according to the lawsuit.

Agreeing to offer the channels to AT&T at no fee for re-transmission would then lead to lower offers from other cable and satellite operators in the future, the lawsuit states.

“At that point, there will be a race to the bottom that ultimately puts Circle City out of business, and kills one of the best examples of Blacks’ and other minorities’ ability to succeed and lead in American media,” the lawsuit alleges.

McCoy signed long-term deals with all of the area’s large cable distributors, including Comcast and Charter, after purchasing the stations. Only DISH Network, AT&T U-Verse and DirecTV customers are without WISH-TV and MyINDY-TV 23.

The Circle City Broadcasting suit claims, “AT&T’s present behavior in Indianapolis presents the perpetuation of the systemic racial bias embodied in its playbook and is an existential threat to minority-owned media.”

The lawsuit filing includes correspondence between McCoy and AT&T officials.

“From Sept – January, AT&T acted as if I they would allow me to negotiate a fair fee. So with that intention I, in good faith, let you air my product for free until January 31, 2020 when I finally realized you never had intention on compensating me,” McCoy wrote to AT&T on June 16.

The lawsuit states that Circle City Broadcasting “can deduce from station financial information to which it does have access that payments were being received prior to Circle City’s acquisition,” which would conflict with Thun’s statement.

In a written statement to WISH-TV, an AT&T spokesperson said, “Circle City sued as a negotiating tactic only after we declined its demands for compensation above and beyond what similar independent stations receive.”

McCoy called that assertion a “flat-out lie,” and added, “the truth will come out in due time.”

Circle City Broadcasting is seeking monetary damages, and asking for a jury to hear the case.