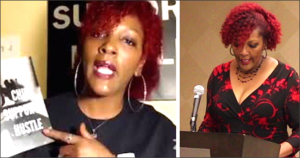 Detroit, MI — Author Kenya Rahmaan has spent thorough time examining the flaws of the American child support system and how it has developed into a tool of division.

In her book, The Child Support Hustle, she goes into a detailed analysis of how the child support system has alienated fathers from their children while amassing profit for the state.

Ms. Rahmaan has discovered how the use of inaccurate labels has caused destruction amongst parents who live in separate households. The term fatherless has been heavily indoctrinated into our psyche. We have been convinced that because the father does not live in the same home as the mother and child that he is not active. This is far from the truth. You can be an active father without living in the same household as your child based on Kenya’s findings. She goes on to explain how it is beneficial for the state to mislabel two household families.

As of 2019, the Office of Child Support Enforcement or OCSE (2020) reported that the national average for the return on investment (ROI) for every dollar spent on the child support programs was $5.06. Some states have reported ROI in the double digits. For example, Texas and South Dakota reported an ROI of $11.81 and $11.68, respectively, during FY 2019, (OCSE, 2020). For the sake of making money, the government purposely and unapologetically began to villainize fathers to maintain a structure based on misinformation.  Children are wrongfully counted as fatherless, which increases the child support caseloads thus, increasing ROI.

When children are born to unmarried parents, no matter what their race, color, or creed, without legal paternity establishment, the father has no legal rights to his children. States began rolling out the paternity establishment agenda when the reformation of welfare and child support occurred in 1994. The Clinton administration, along with bipartisan support, passed the most comprehensive welfare bill to date. These changes ramped up the already established child support system.

Several tactics have been implemented in an attempt to delete active fathers and create codependency between single mothers and the state. The Child Support Hustle is an amazing tool to inform co-parents of how to navigate through a system created to divide. To learn more and/or to purchase the book, visit TheChildSupportHustle.com.