“I remain committed to representation of those most vulnerable to abuse by their public officials and big business.” 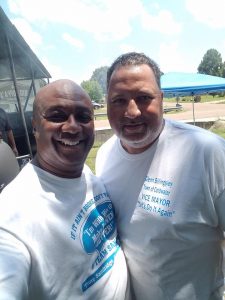 Coldwater, MS.–Coldwater is in hot water because of two Town clerks claim of abuse by a public official. Two Town clerks have come together to hire one of Mississippi’s most prominent lawyers to file a federal lawsuit against Glendon Billingsley, in his official capacity as Mayor of the Town of Coldwater.

Nicole Johnson, Town Clerk and Reshea Thomas, Town Deputy Clerk of Coldwater have retained Attorney Ronald W. Lewis, a renown, preeminent peer-rated attorney. Lewis is an attorney with more than four decades of practice dedicated to civil rights, employment discrimination and environmental protection cases. He was admitted to the Mississippi Bar and the Bar of the United States District Court for the Northern District of Mississippi in May, 1978. He was admitted to practice in the U.S. Court of Appeals for the Fifth Circuit in 1979, the U.S. District Court for the Southern District of Mississippi in 1985, the U.S. Supreme Court in 1990 and the U.S. Claims Court in 1991. Mr. Lewis has been in continuous private practice in Oxford, Mississippi since 1978. 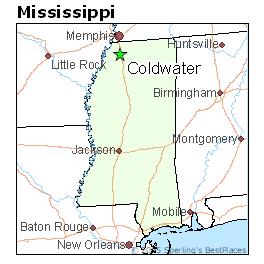 With this prestigious legal background, Attorney Lewis has taken on a case dear to his heart as he said in the quote above, “I remain committed to representation of those most vulnerable to abuse by their public officials and big business.” He has been retained by the two plaintiffs putting the town of Coldwater in hot water by filing a federal lawsuit civil case no. (3:21-CV-200-DMB-RP) in the United State District Court for the Northern District of Mississippi Oxford Division who claim that their rights of procedural and substantive due process were violated by the newly and duly elected Mayor Billingsley less that 15 days after he was sworn in as the newly elected Mayor on July 1, 2021.

Johnson and Thomas, who had served in the capacity of Town Clerk and Deputy Town Clerk since July, 2017, were fired by the Board of Aldermen on 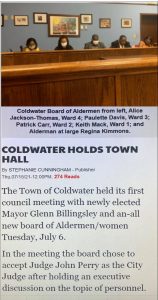 The Town of Coldwater Aldermen holds Town Hall meeting to discuss personnel matter as reported in the Tate Record newspaper on July 15, 2021. The same day the two clerks, Johnson and Thomas, were terminated.

the recommendation of Billingsley on July 15, 2021 soon after they denied Billingsley’s request for them to give him the combination to the Town vault, where ballots, board minutes, cash, checks and other important documents are stored. After being terminated, Johnson applied for unemployment insurance benefits but was denied for “refusing to perform assigned duties” (refusing to reveal the Town vault combination to the mayor).  Thomas applied also and was successful in her pursuit. Johnson is appealing her denial.

Coldwater is in hot water because the former Deputy Clerk Ella Cummings said, “No.” when asked if, Johnson and Thomas, two clerks she trained from July 2017 through December 2017, ever reprimanded, received any negative evaluation for insubordination or for failure to perform their duties as assigned.

Records and sources report that Johnson and Thomas were well-trained and knowledgeable of their duties as assigned prior to the newly elected Mayor’s unprecedented request for them to give him the combination to the vault, their denial, and subsequently their    termination which has triggered a federal lawsuit against the Town of Coldwater and its newly elected Mayor Billingsley.

The Town of Coldwater is in hot water because of what appears to be a violation by its governing authorities (Board of Aldermen) who had not voted on whether the Mayor should be given the combination to the Town’s vault. This procedural process is backed up by a 1999 Mississippi Attorney General Opinion N. 1999—434 which provides in part, “the governing authorities must determine in the exercise of sound discretion which municipal officers and employees should have keys to specific municipal buildings and the municipal vault.” This was reiterated in the 2000 Mississippi Attorney General Opinion No. 2000-0064. The state of Mississippi Attorney General opinion appears to give Johnson and Thomas the legal right and duty to stand their ground by denying the Mayor the combination to the Town vault. Not only, did Johnson and Thomas have the State Attorney General’s language to stand on but also, the former Mayor, Dr. Jesse Edwards, had created a Personnel Policies and Procedures manual for the Town of Coldwater which was adopted in March 1990 by the Board of Aldermen and retired Town Clerk, Mary G. Jackson, who said during an interview, “The combination to the Town vault is about trust and if I gave the combination then anyone could come along and take whatever they want to out of the vault any hour of the day and I would be responsible for what is or is not in the vault after I have given the combination to the mayor.” “This is what I trained  the clerks who came under my supervision, the policies and procedures from the state and the Town of Coldwater.” The Personnel Policies and Procedures adopted by the Town of Coldwater in March of 1990 speaks specifically to the process by which an employee can be dismissed. On page 6 and 7, regarding reason for dismissal, “An employee may be dismissed from his position with the Town of Coldwater, Mississippi, for appropriate reasons. (Emphasis added.) The prior approval of the Mayor and Board of Aldermen will be required in connection with all dismissal actions.

Unlike the former clerk for the Town of Coldwater, Mississippi, George Nangah, who was fired for cause after a meeting with former Mayor, Dr. Edwards, and upon his recommendation to the Board of Aldermen per the adopted March 6, 1990 Personnel Policies and Procedures, Johnson and Thomas lawsuit claims they were fired without cause. Regarding the Board of Aldermen voting to fire Nangah, it was revealed that Billingsley was the only Alderman who voted not to remove Nangah from his position as the Town Clerk for cause. Nangah was later convicted of wire fraud and sentenced last year on January 16, 2020 to 21 months in federal prison, According to a release from the U.S. Department of Justice, Nangah used an unauthorized Town of Coldwater debit card to purchase gift cards for airline tickets, hotels and retail stores from 2014 to 2017. Billingsley served as an Alderman during this time frame. The DOJ said that none of these gift cards were used for the benefit of the Town of Coldwater. The DOJ also said that Nangah also made unauthorized payments to himself and one other person on the Town of Coldwater’s Clearing and General Fund bank accounts. Overall, Nangah reportedly caused a loss of $216,401.28.

Johnson and Thomas in their lawsuit claim their firing and dismissal were without cause and that it violated their due process rights as they were not furnished advance written notice of the charges against them; therefore, denying them their right to respond and for denying their opportunity to have their response considered by the Mayor and Board of  Aldermen prior to them being fired on July 15. As Johnson and Thomas were full time employees of the Town of Coldwater and not “employees at will” and could only have been dismissed “for cause” which is an appropriate reason according to the 1990 adopted   policy by the Town of Coldwater, they have a property interest in their employment and the Board of Aldermen on the recommendation of the newly and duly elected Mayor Billingsley appears to have violated the two Town Clerks by not giving them procedural and substantive due process protections of the Fourteenth Amendment.

The town of Coldwater officials did not immediately respond to requests for comments on the lawsuit.

Mayor Billingsley and the Town of Coldwater are in hot water because two well-trained town clerks, Johnson and  Thomas claims their right to due process, which is enshrined in the Fourteenth Amendment to the U. S. Constitution, was violated for the manner they were fired as well as the firing itself which they say caused them severe substantive financial deprivation and loss of standing in the community. In their request for relief from the U. S. District Court for the Northern District of Mississippi Oxford Division, Johnson and Thomas, are seeking reinstatement in their official positions as Town Clerk and Deputy Town Clerk, back pay and fringe benefits, in the alternative to        reinstatement, two years front pay and fringe benefits at the current pay, general damages for             humiliation, emotional anguish, loss of standing in the community and inconvenience and plaintiff’s       attorney fees and court costs. Coldwater is in hot water with its newly and duly elected Mayor Glendon Billingsley.