Six people were killed and nine others were injured in a violent, fiery crash involving multiple vehicles on Thursday in Windsor Hills. The incident backed up traffic. Drivers were diverted away from La Brea Avenue and Slauson Avenue and   directed to neighborhood streets. 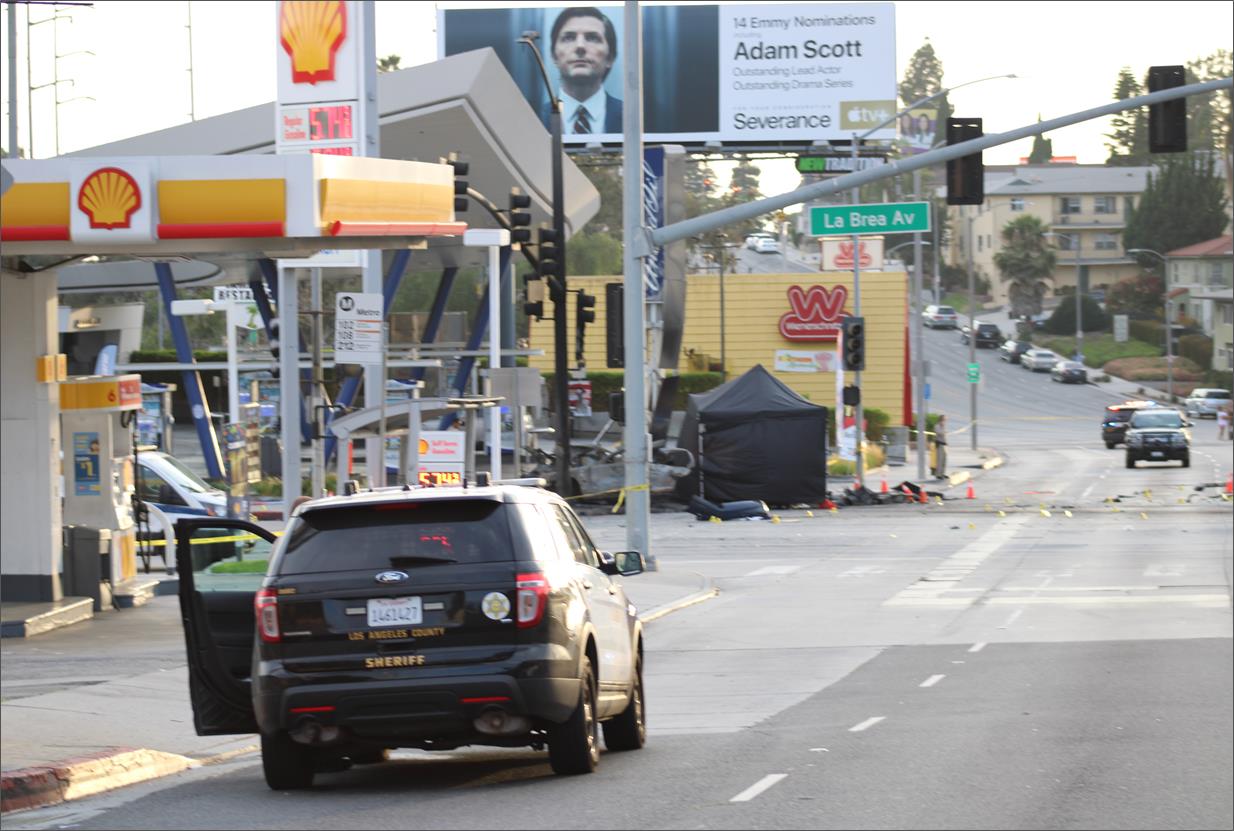 Photo by Gloria Zuurveen Sheriffs on the scene after a deadly crash where six people were killed and nine others were injured on Thursday afternoon.

The crash, according to the CHP, was caused by a Mercedes coupe that was speeding south on La Brea Avenue and ran a red light, slamming into several cars at Slauson Avenue around 1:30 p.m. The video from nearby businesses in the area showed the Mercedes coupe passed a stopped car at the red light going south at high speed and it hit, according to KABC, at least three other cars and they all went up in flames near the United gas station.

Officials say a pregnant woman, an infant and three other adults were killed in the crash and subsequent fire. Investigators also said the driver of the Mercedes, described as a woman around 40 years old, survived the crash and was described as being in fair-to-moderate condition at the hospital. Officers were interviewing her. 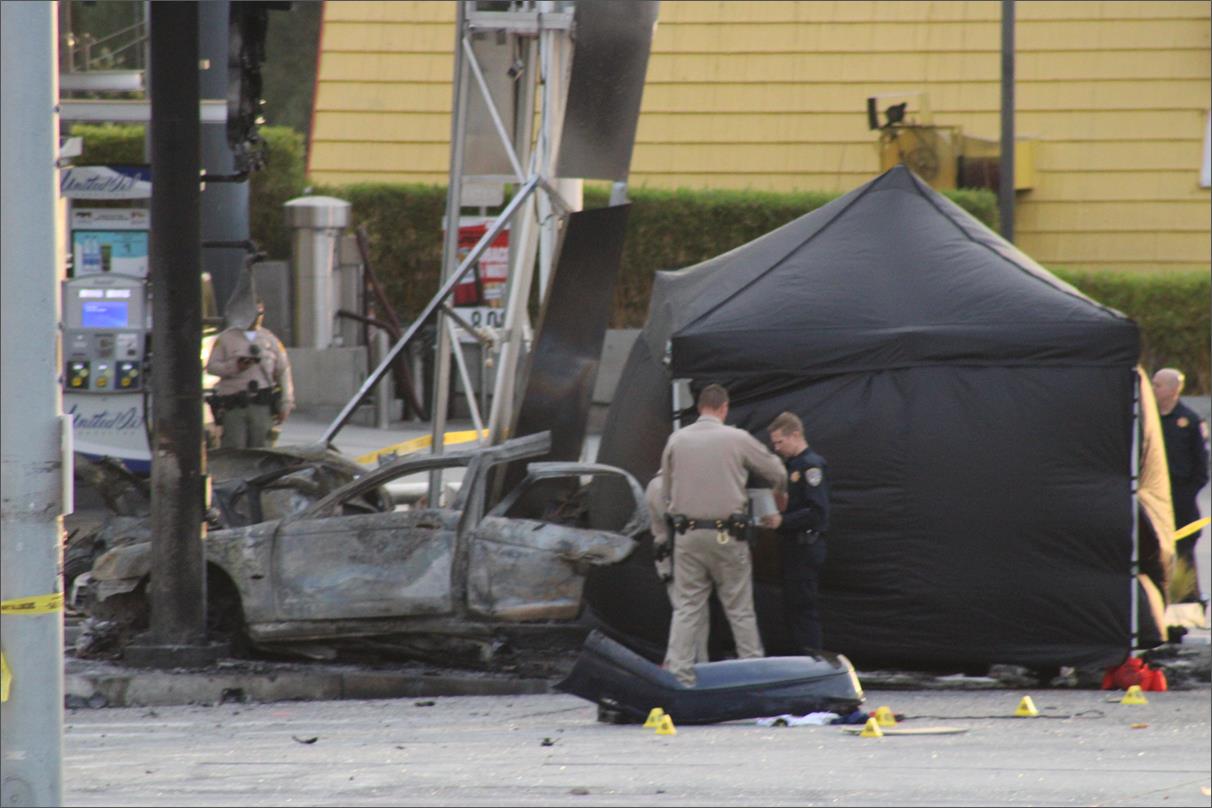 A CHP spokesman said the agency expects to present multiple criminal charges for the crash to the Los Angeles County District Attorney’s Office.

Witnesses described hearing an incredibly loud noise, followed by fire and sparking electricity. Thick plumes of smoke drifted into the sky for several minutes before firefighters arrived. “It looked like the whole intersection from corner to corner was on fire,” said witness Harper Washington. “A lot of sparks and electricity. I was under the impression that, really at first I thought they dropped a bomb on us. I thought another world war had started. 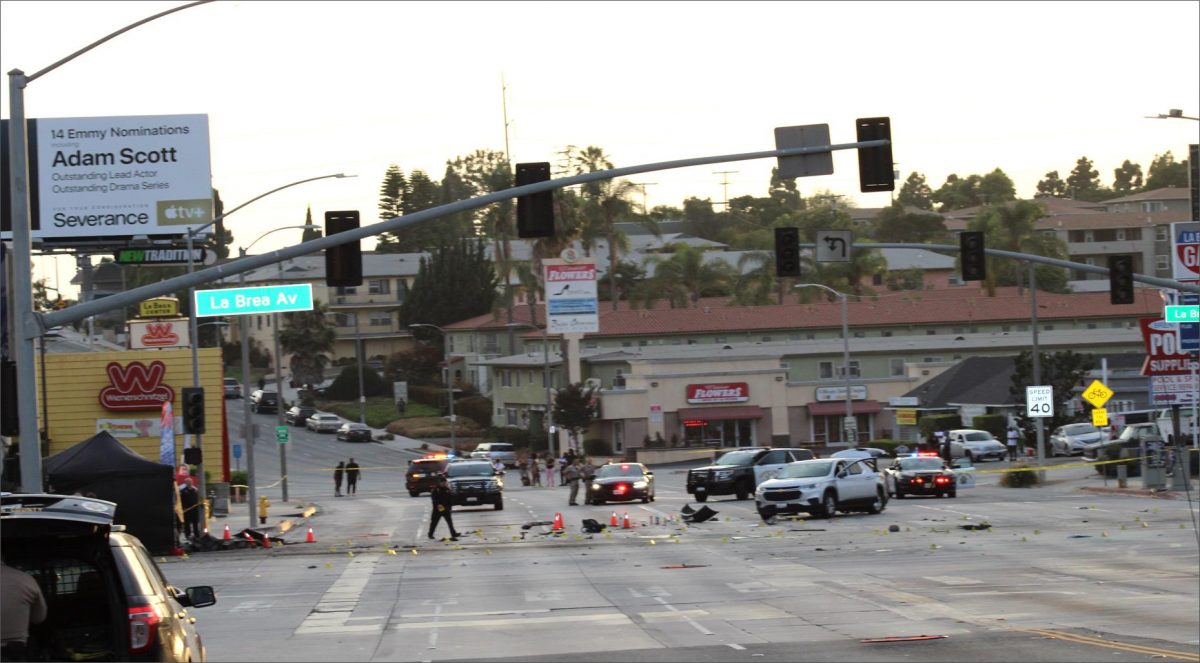 Then I realized it was a car into the sign.” “Once the fire went away and the booming left, I realized it was two cars there. You could see the people on fire and that’s just sad. I really pray for the people and the community.” The incident happened in Windsor Hills, an unincorporated community just south of LA’s Crenshaw district. CHP is handling the investigation with assistance from the Los Angeles County Sheriff’s Department. The ages and names of the victims were not immediately available.

Source: KABC and PN Staff contributed to this story.