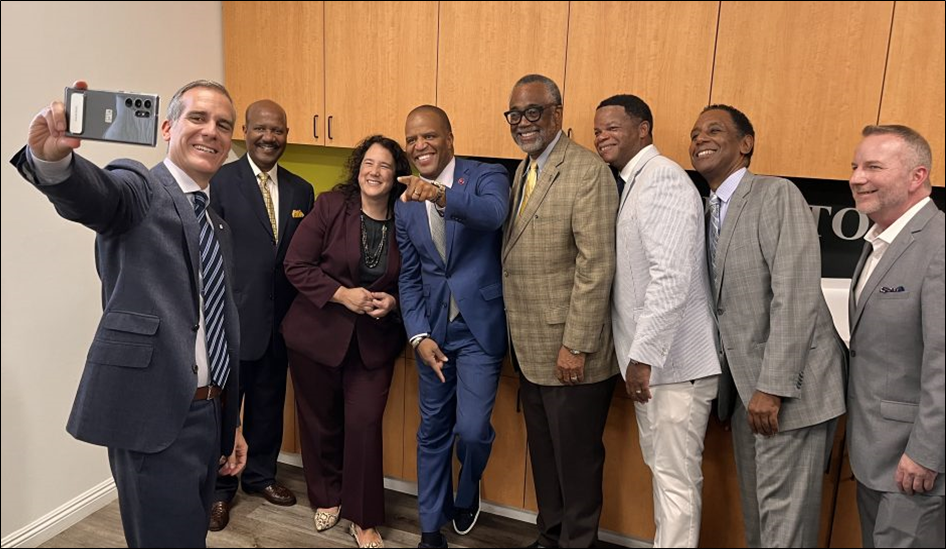 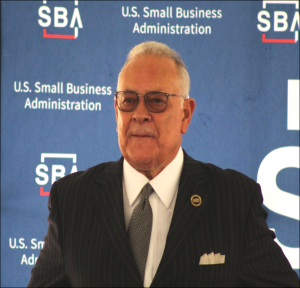 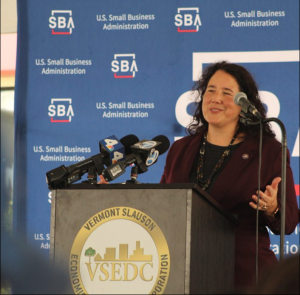 “Just recently we opened up our multi-million-dollar technology center at 6109 South Western Ave – that’s right, in the heart of South LA – in a partnership with Best Buy and Annenberg Foundation. At that center we will be teaching our kids and young adults coding, cybersecurity, drones, digital animation, digital photography and my personal favorite, we have a state-of-the-art sound recording studio that would marvel anyone in that industry. With the support of AT&T, we will now be opening our Connected Learning Center in mid-October. At VSEDC we don’t believe technology is of the future, but rather now. We must equip our future generation with technical skills for meaningful and self-sustaining careers for business ownership,” said Joseph T. Rouzan, III, President and CEO of Vermont Slauson Economic Development Corporation. 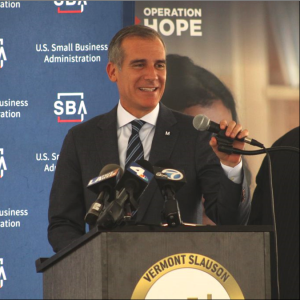 Eric Garcetti,
Mayor of the City of Los Angeles

Eric Garcetti, Mayor of the City of Los Angeles, said, “Look across the street right now. I want everyone to see this project which Metro and the City of Los Angeles is doing, taking old, decrepit train tracks that will now be the most beautiful bikeway/walkway/parkway that will go from rail to rail, all the way to the river, eventually. It’s really a sign of a Los Angeles rising again. It’s leading in job creation of all the big cities in America. Leading in wealth building in all the big cities in America. 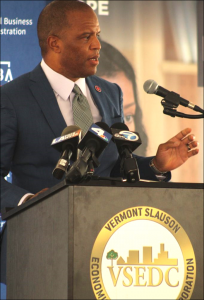 Raised the minimum wage of Black and Brown incomes, increased by 44 and 43 percent, respectively, while the country only went up by 27 percent. We got a lot of work still to do, but this is a good place to be with this group here today. And it all starts with small business. This initiative is necessary. We didn’t take to the streets two years ago to forget about racism today. We have to be ongoing, intentional, and we have to see it through. Racial injustice isn’t just a march one day. It is a cause for our lives.”

Curren D. Price, Los Angeles City Councilmember, Council District 9, added, “The partnerships we celebrate today makes for a stronger South LA. I am excited about the small business assistance our small business community and our entrepreneurs are going to be receiving. Both from the SBA and Operation Hope – another legacy organization. And just think, one million Black businesses. That’s got a nice little ring to it, doesn’t it? It surely is music to my ears.”

“The pathway has to be inclusive. When we look at the last 10 years, the face of entrepreneurship has changed. And women and people of color are the ones leading that change, leading entrepreneurship rates. Whether it’s from necessity or opportunity, the fact is that Black women and Brown women have been starting those businesses. And we will rely on them to ensure our economy can be globally competitive. Morgan Stanley did a study and found there’s a 4.4 trillion-dollar opportunity gap in our economy because they know that women and businesses owned by people of color don’t achieve the same level of revenues, or the same level of job creation as white owned businesses because they are under invested in. And that’s exactly what the SBA does. The SBA tries to fund businesses or get our private partners to YES more easily so that our businesses can succeed,”  Isabella Guzman, SBA Administrator  said during the 15 stop national tour kick off at Vermont Slauson Economic Development Corporation in South Los Angeles.