Emergency Intervention Plan of Action better known as (E.I.) is a 501c3 nonprofit organization under the leadership of Eddie Flemming, a Lead Consultant and Field Organizer. 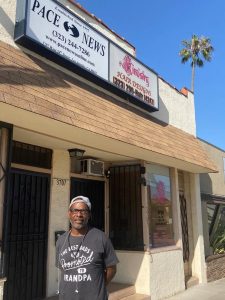 Flemming along with several of his collaborative partners met recently at the headquarters of PACE NEWS  on 54th Street in Los Angeles to report what they say are blatant disparities when it comes to allocation of funds to help with solutions to house the homeless at the Los Angeles Homeless Service Authority (LAHSA). They say there is so much red tape that makes it extremely difficult to   maneuver through the muck and mire to help the people who needs it most, the homeless, who are living in the midst of hell on earth while many at LAHSA live comfortable in air conditioned homes and offices without a care in the world other than to pick and choose who gets the      billions of taxpayers dollars that’s allocated to them after a yearly homeless count that continuously show that Black people, who are the least in population, always seems to come out the highest in the statistical data for being homeless and unhoused and many of them are youth. They say that something is wrong and they want to help but the     obstacles coming from the status quo creates frustration and a lot of intimidation from LAHSA and its affiliate organizations.

LAHSA is one of the responsible parties to the puzzle of helping the homeless with public dollars from tax payers.  LAHSA administers federal, state, and local funding to almost 100 service providers. Through Requests for Proposals, bids are submitted for services.

Flemming believes that the affiliated third parties administrators and service providers like HOPICS play a vital role in the disparities of distributed funds to the service organizations like Emergency Intervention Plan of Action. Although I have not witnessed it for myself, it is reported that HOPICS has a new building yet the homeless are bursting out all over the place seeking shelter. 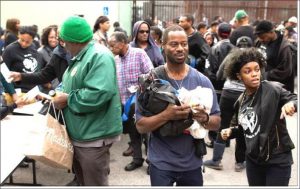 We Are Our Brother’s Keepers giving backpacks to homeless during one of their annual Christmas Backpack giveaway downtown on Skid Row. Photo by Gloria Zuurveen

The funds for housing the homeless is a slow pace considering how many people were on hand to get vouchers so much so that the Congresswoman Maxine Waters got caught up in the embarrassing encounter with more than she could handle when hundreds of homeless people showed up and were turned away but not before the  Congresswoman told them to go home.

They told her that they had no homes and that is why they were there in the first place. News reports says, “she chuckled.”

I don’t know for sure but it seems to have been a hot topic. Well so is HOPICS. HOPICS says its mission is dedicated to providing the highest quality innovative social service to South Los Angeles with an emphasis on behavioral health and housing stability. Flemming mission is likewise.

His ideas are progressive and powerful for rebuilding the community in general and the Black community specifically. He has documented letters and proposals he has sent to all who would listen to him but they fell on deaf ears.

One instance he sent correspondent including his ideas and solutions to help the homeless community. He himself has been institutionalized in the mass incarceration but now, he say, “ It was education” that gave him a sense of being what he says was “reincarnation”. He also told 2nd District Supervisor Holly Mitchell when he sought her help to bring his vision for victory to the homeless to fruition but she never responded.

He spoke about his disappointment in the Black politicians who are in positions but do not seem to care about the homeless and especially the youth. He talked about the culprit of homelessness being the school to prison pipeline and what is needed to stop the flow and help the youth live and grow.

Flemming is a willing, ready and able young Black man of 52 years old and who has a way to lead a group of dedicated community outreach workers to get in between the building and seek and find those who are in need and bring them to a place of culture and comfort through their re-entry and life-skills curriculum.

Like HOPICS, which was founded by a passionate homeless veteran, Mike Neely, who first named it Homeless Outreach Program (HOP), conceptualized an agency that would help individuals and families navigate the complexities of the social service system.

Since 1992 it is called the Homeless Outreach Program’s Integrated Care System (HOPICS), a one stop shop where individuals and families are provided with a menu of services or referrals for services.

So too, Flemming and his cohort of fellow former felons desires to implement the Emergency Intervention Plan of Action as a solution just as Neely conceived and achieved HOPICS with private and public funding.

But Flemming calls HOPICS and other third party administrators out as the problem and why many Black men are not given a chance to help the homeless communities on a larger scale even though they know what works and they have lived experiences in the trenches where as many who work with this population today do not have what Flemmings and his cohorts have to offer as solutions to the homeless and their behavioral issues.

Flemming’s profound and provocative Emergency Intervention Plan of Action calls for the community to do for self with hands on, boots on ground engagers from the local community. Leaders of E.I. says they are tired of witnessing others from out of state, like the nonprofit organization, the Amity Foundation, which is  headquartered in Tucson, Arizona, win bids when E.I. and its qualified collaborative partners could provide the needed intervention if only funds were made readily available for them like they are made for organization outside of Los Angeles city and county. This is troubling they say and they want to see change.    LAHSA is getting away with spending billion of dollars all the time homelessness seems to becoming the Los Angeles’ biggest problem. It appears that Black men like Flemming and hundred of others are going without funds to operate the Emergency Intervention Plan of Action to help the homeless.

LAHSA contracts and disburse the public funds with very little oversight, accountability or public notices to inform the public when there will be an RFP release.

The public has a right to know but many times they don’t and billions of dollars are being disbursed and distributed to the same service providers without solutions only a pattern of handouts to the same organizations yet, again, the  community continues to see an increase in homelessness year after year.

Maybe it’s time for a change to the script and to give critically needed organizations a chance to take a dip from the billions of dollars of tax payers funds and to help to lead the way from the homeless without hindrances with the Emergency Intervention Plan of Action.

Let us know what you think about the LAHSA and the homeless problems we face in Los Angeles @ The Southern Truth: https://www.pacenewsonline.com/contact-us/